You are here: Home - Editor's Pick - Salisbury Street townhouses by Warren and Mahoney

Multi-unit living is taking its rightful place in the spotlight at last and these three townhouses in Christchurch offered us the chance to combine design flair with innovative construction technology on a compact infill site with tight constraints. Text Daryl Maguire, Warren and Mahoney. Photos Dennis Radermacher.

Salisbury Street is close to Hagley Park and in the centre of the emerging Victoria Precinct, so the developers were keen to create an exclusive apartment complex that capitalised on the desirable location.

These townhouses feature distinctive gabled forms that are an allusion to Warren and Mahoney’s beginnings in the 1950s. Raking the sky at a sharp angle, they lend a strong geometric presence to the complex but also provide a practical response to issues thrown up by the inner-city location. The steep pitch, punctuated only by skylights, effectively allows the building to turn its back on a multi-storey apartment block on the eastern elevation. Conversely, to the west, the townhouses open up, with extensive glazing to capture the last of the sun, so important in a chilly Cantabrian winter. The ground level is constructed of aerated concrete-block and is a further reference to the company’s modernist roots which provides a robust base.

Getting the townhouses as tall as possible to access light and views was a priority and we were fortunate to have some leeway with local zoning regulations. This allowed us enough height to accommodate a very generous floorplan into each with four bedrooms and two living areas in a 230-square-metre footprint over three levels. Downstairs is a bedroom zone, the living, kitchen and dining area is sandwiched in the middle, and upstairs a master suite takes full advantage of the view. Double garaging for each house was also part of the commission.

Battened black zinc makes a crisp statement on the highly visible roofing and the townhouses are clad in whitewashed vertical cedar weatherboards which further emphasises their geometry and is in keeping with the predominantly colonial aesthetic of the neighbourhood. Fixed louvres provide much needed shade and screening to each townhouse. 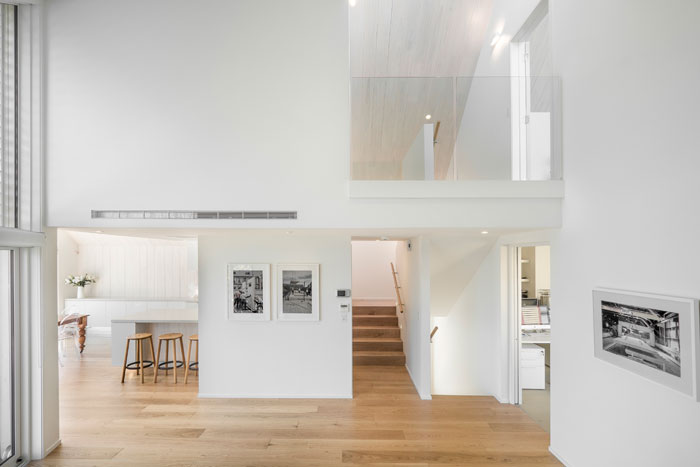 Innovation for the situation

However, it is not what is on show that makes the significant design difference in this project. Beneath the skin, cross laminated timber (CLT) panels replace traditional timber framing. Although cross laminated products have been available internationally for about 30 years, the product is relatively new in New Zealand and Nelson-based company, XLAM, is the only CLT manufacturer in the Southern Hemisphere.

In post-earthquake Christchurch, architects’ and builders’ views on construction processes have changed. We were excited at the opportunities for this product since a building made of CLT is roughly half the weight of a concrete building, but still incredibly rigid. In this undertaking, we were looking for strength, lightness and speed of build and the CLT met those requirements. The pine panels are assembled on site so there’s a great deal of time saved on the labour.

Pragmatic considerations aside, the laminated timber was deliberately showcased, too, by exposing it in selected wall and ceiling planes. It provides instant warmth and character, contrasts with the white plasterboard surfaces and has been coated with a translucent whitewash so that it does not age or yellow – but is still visible to tell the story of the materiality. Glass balustrades and native timber floors continue the modern material palette. The developer, who operates their business from the front house, had access to a selection of matai which was used here.

While the townhouses have a similar footprint, their individual planning is responsive to the neighbours and to each other. The front property features north-west terraces which face the street and a view of Hagley Park while the centre house is, of necessity, more inward looking to maintain privacy. The rear, southern-most townhouse overlooks the courtyard of an historic neo-gothic stone building – a protected view that will never be built out.

With double-height volumes beneath the exposed structure of skillion roofs, the feeling throughout is contemporary and airy. This is further enhanced by each house having two options for outdoor living either on an elevated terrace or a more linear balcony where the doors can be flung open to allow a cooling cross breeze and access to the elements.

The Salisbury Street development was one of the first multi-unit residential developments in Christchurch to feature the sustainable cross laminated timber panels, making it easier and faster to build.

At the recent 2016 Canterbury Architecture Awards, the townhouses were praised by the judges as “an outstanding exemplar for medium density, central-city living”.

Daryl Maguire is a registered architect in both New Zealand and California and joined Warren and Mahoney as Principal in 2012, based in the company’s Christchurch studio. Daryl believes architecture plays a crucial role in shaping people’s lives and works diligently to ensure the design concept is sustained through the delivery of built form.